A simple visual guide to wasps in Maidenhead

Posted on 30th April 2020 at 16:53
As with any species on our planet we know that they are given a classification, wasps, bees and hornets belong to the order Hymenoptera, within this order we have sub groups but to keep things simple and to identify the most common of wasps, bees and hornets within the UK we have created this simple visual and informative guide for our customers.. 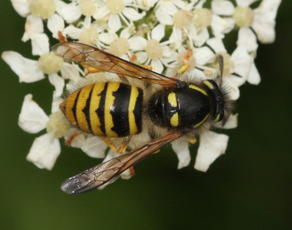 Common and widespread throughout the UK, these wasps are largely found in the countryside, particularly hedgerows and meadows. The most likely time to come across this wasp species is May to August.
They can be identified as having a yellow face with 1 dot and 2 yellow spots at the rear, their thorax hairs are located at the sides and they are typically about 2cm long.
These wasps can be very aggressive and build their nests underground and in bushes and trees and disturbed by walkers and keen gardeners. 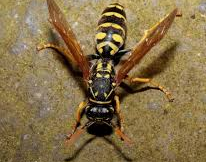 This wasp is more resident in the Channel Islands and normally just a passing visitor to the UK mainland and only a few numbers of nests reported here. They are believed to have come over via shipment of goods from Europe.
Harder to identify than many wasps as they can appear similar in appearance to mason and social wasps, the queens, males and workers are hard to differentiate between.
You are most likely to see these nests around outbuildings, suspended from ceilings, they are constructed of wood pulp, a cluster of hexagonal cells rather than a flat comb structure. 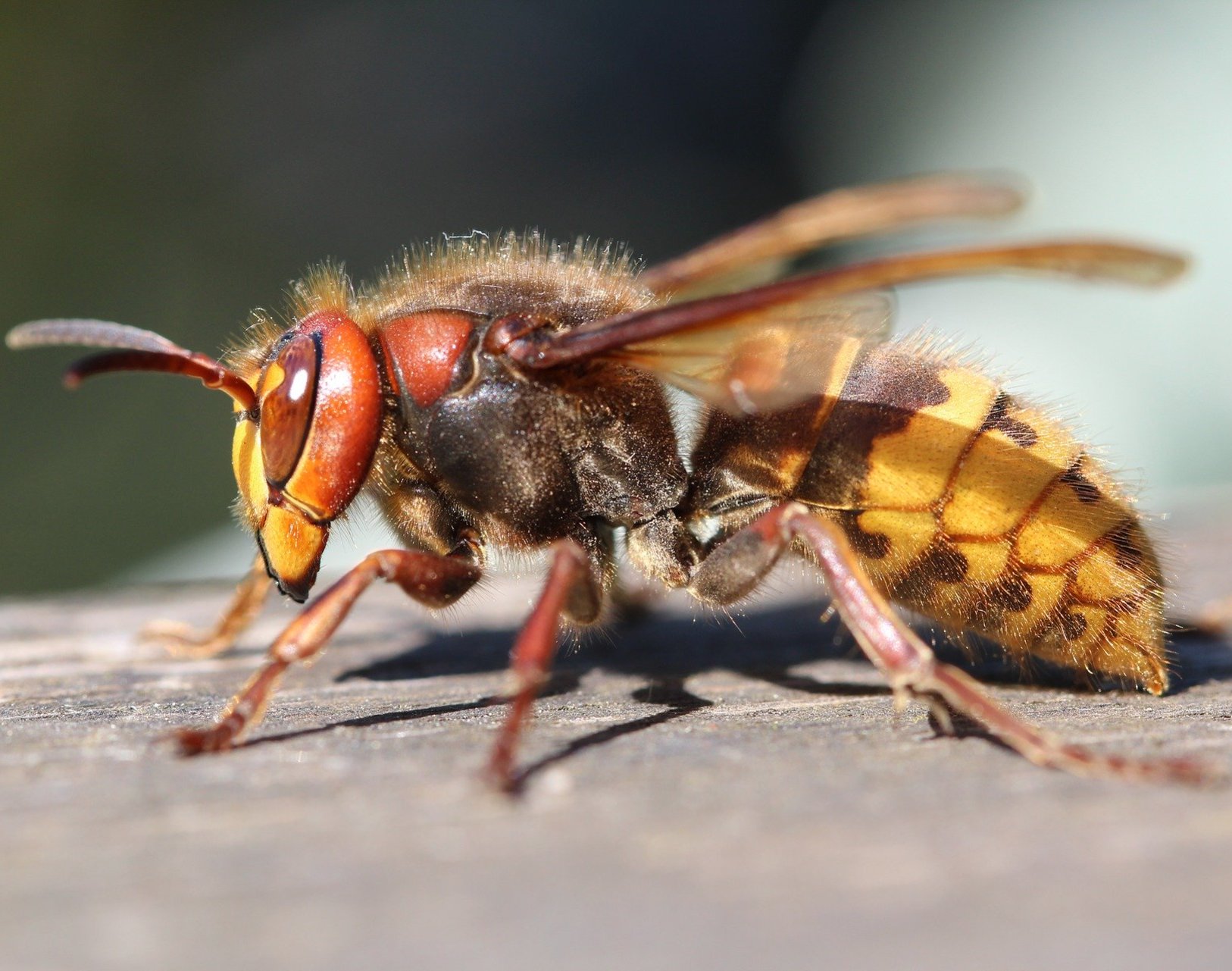 This species is impressive typically 2.5-3.5cm in length, the largest social wasp in the UK. Identified by a brown thorax and alternating stripes of orange/yellow and brown/black.
Mainly found in gardens, parks and woodlands, commonly seen between the months May to November. Nests are created from chewed wood pulp and eggs laid in individual paper cells, the nest grows over the summer and the queen dies after laying eggs that develop as new queens and drones.
Newly mated queens then hibernate but the old nest is never re-used. 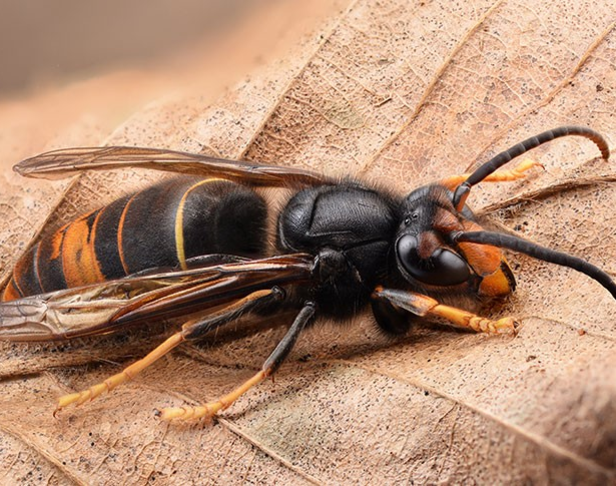 Unlike their European cousins these hornets are slightly larger and can be identified by a velvety brown/black thorax with a yellow 4th segment and an orange head.
These creatures are a real threat to our honeybee colonies as they feed on tree sap, larger insects and honey from our honeybee nests, they are becoming increasingly invasive in the UK and spreading rapidly.
Nests are like that of wasps, starting the size of a tennis ball, these grow throughout Spring and summer and can be found to the exterior of dwellings, garages and sheds amongst other locations. 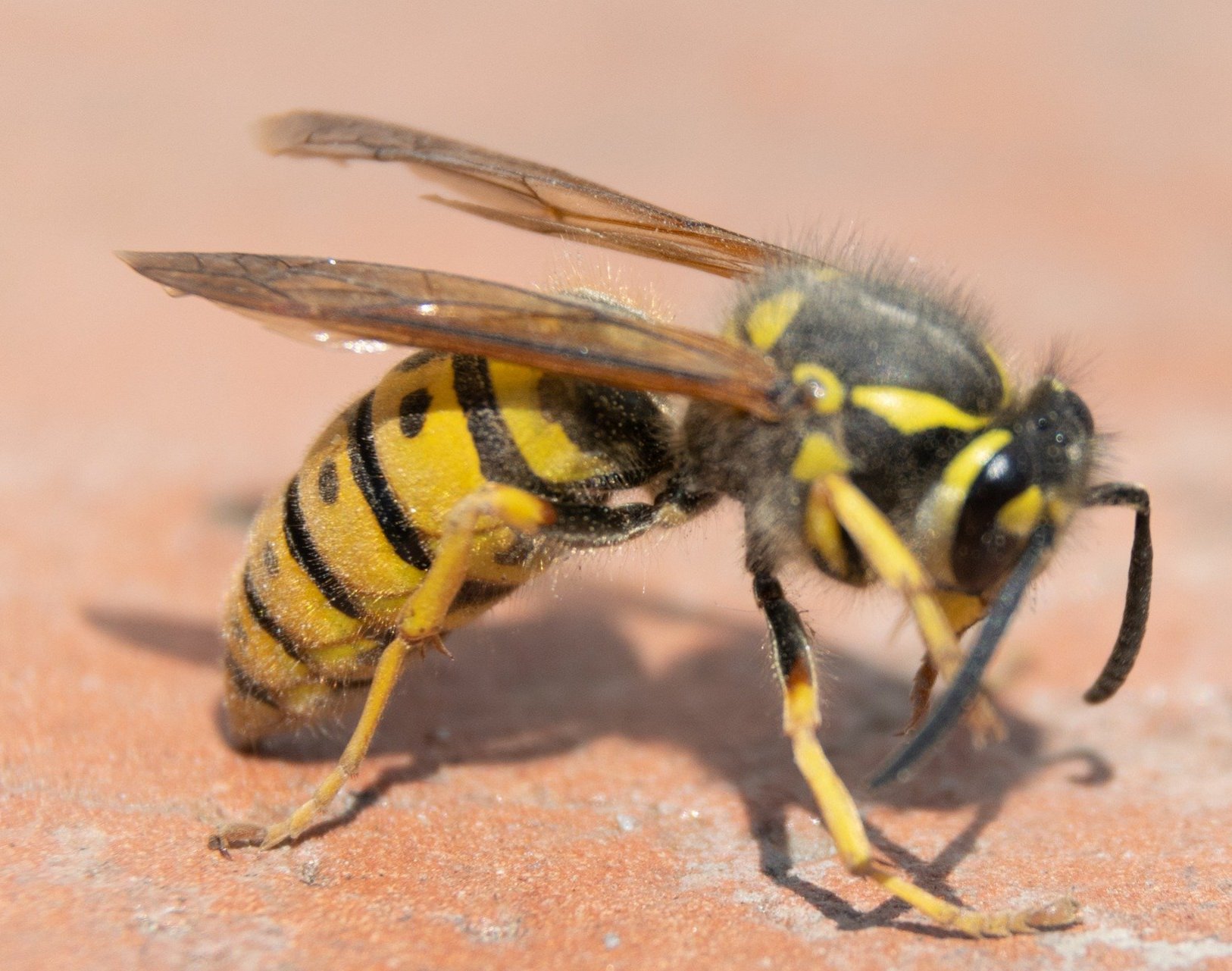 As their name indicates this is the most likely species of wasp, we are familiar with. Around 2cm long they have bright yellow and black bands along the body with the typical ‘waspish’ waist and an anchor shaped mark on the face.
Most seen April to late October around gardens, woodlands and fields. They form large colonies underground, wall cavities, attics and trees. Nests are built from chewed wood pulp and formed into a papery material.
Widespread and common in the UK particularly around BBQ season. 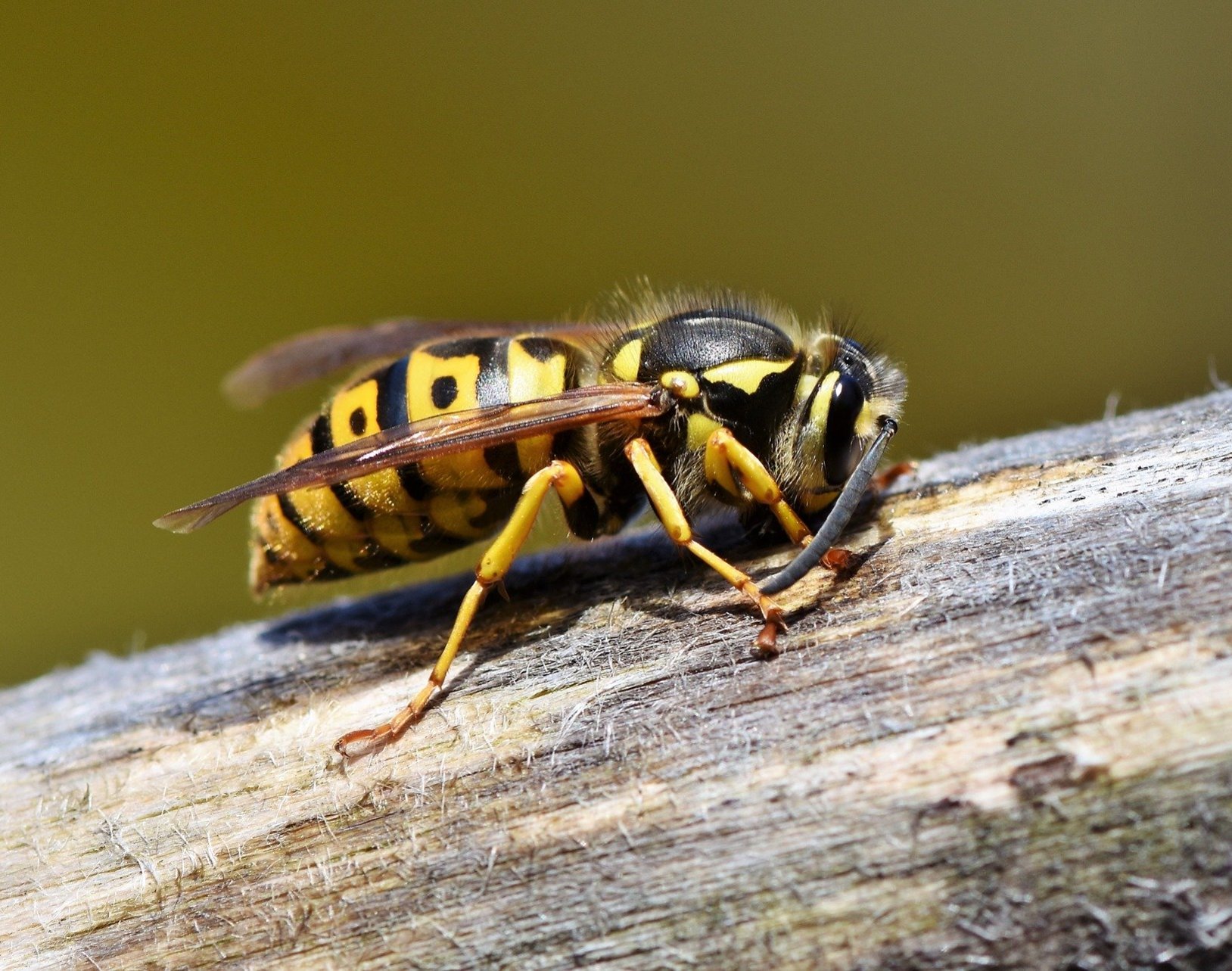 Although similar in appearance as the common wasp these are slightly bigger, best identified by the face which is NOT anchor shaped they usually have 3 small black spots unlike the common wasp.
The stripes on the abdomen tend to bulge in the middle and 4 yellow spots can be found to the rear of the thorax.
The German wasp can be commonly found almost anywhere from April to October. Nests are like that of the common wasp but grey in colour and normally made underground, when disturbed these wasps can be aggressive. 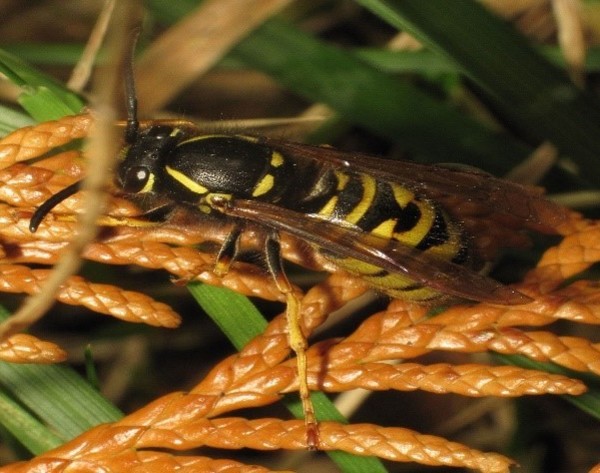 The red wasp is widespread and commonly found nesting in the ground in the UK.
One of the less aggressive and calmer of the wasp species they usually only sting when provoked.
The best way of identifying these wasps is by the reddish/brown marking on the first 2 abdominal sections and a pattern of black markings.
These wasps will be seen during the summer and autumn months frequently on flowers. 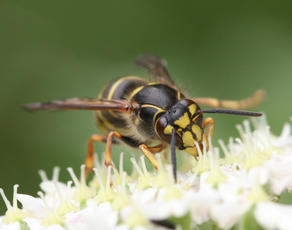 Another species of European wasp that is widely spreading in the UK and becoming increasingly common.
These can be seen around bushes and trees whilst foraging around the nests hanging within them, mainly between June and October.
Four yellow spots on the thorax can distinguish these, with the females these spots can seem to have a reddish tinge, a slim black bar can be seen on the face and the abdomen can appear to be more black than other wasp species. 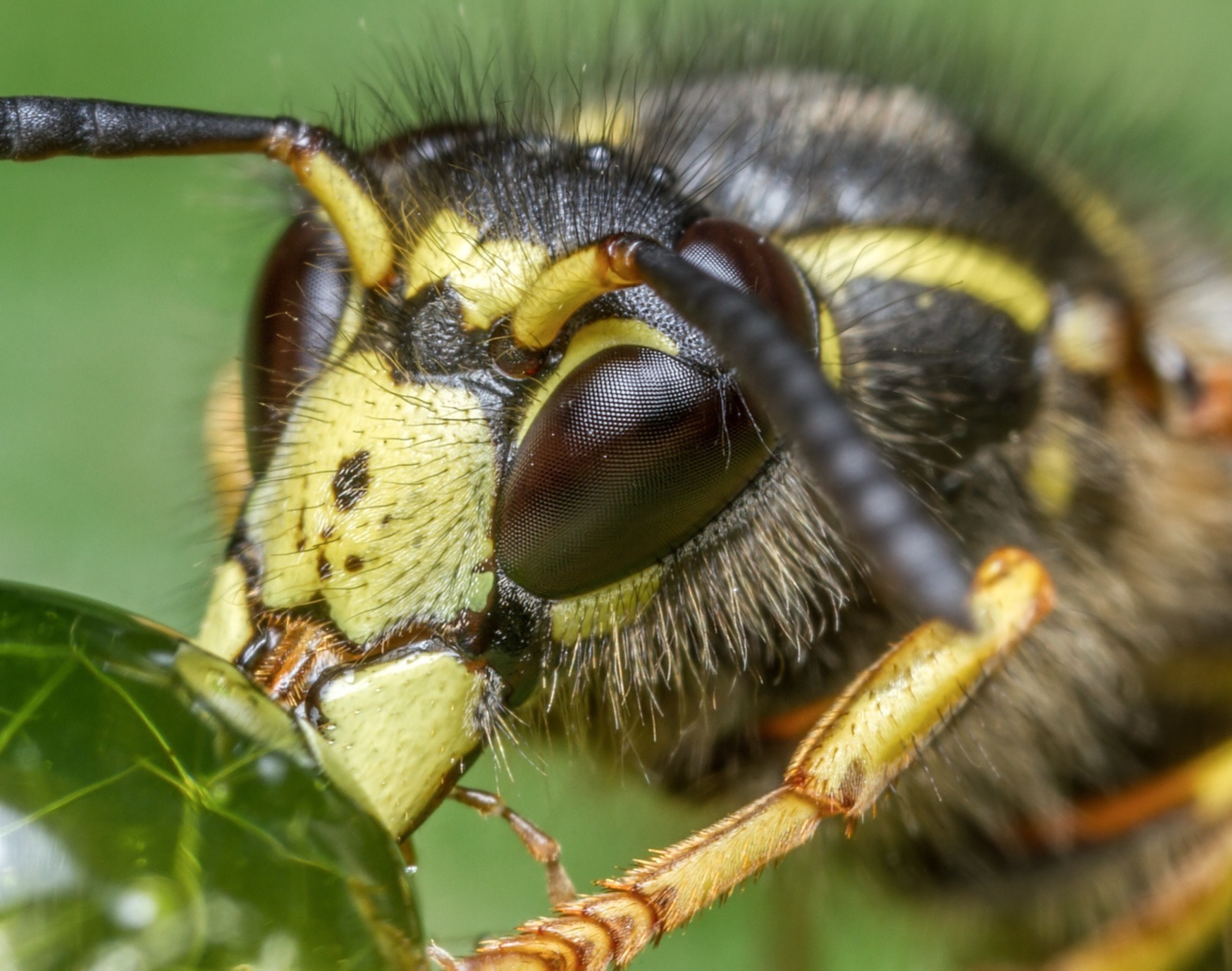 A recent arrival to the UK, these wasps have been here for just over a decade and build a small grey coloured nest in bushes and undergrowth, frequently disturbed by gardeners when hedge trimming.
Very common across Maidenhead and the South East of England and slowly colonising the north.
An early finisher and its common to find part of the garden swarming with wasps all of which seem to be "a little lost", not aggressive at this stage but numbers can be in the hundreds or thousands.

If you have a problem with wasps this summer we are only a phone call or email away, we offer a wasp nest treatment service seven days a week in Maidenhead and we guarantee all of our treatments to get you wasp free and allow you to enjoy your home and garden throughout the summer.
Tagged as: Wasps, Wasps and bee's
Share this post: