The Lifecycle of a Bedbug in Maidenhead

Its always going to be the difficult question; which came first, the chicken or the egg, or rather, the insect of the egg? In this case we will start with just a single bedbug egg, these eggs are a milky white in colour and faintly translucent: you can just make out the insect embryo inside and even see the hole the young bedbug bores to climb out when it hatches. 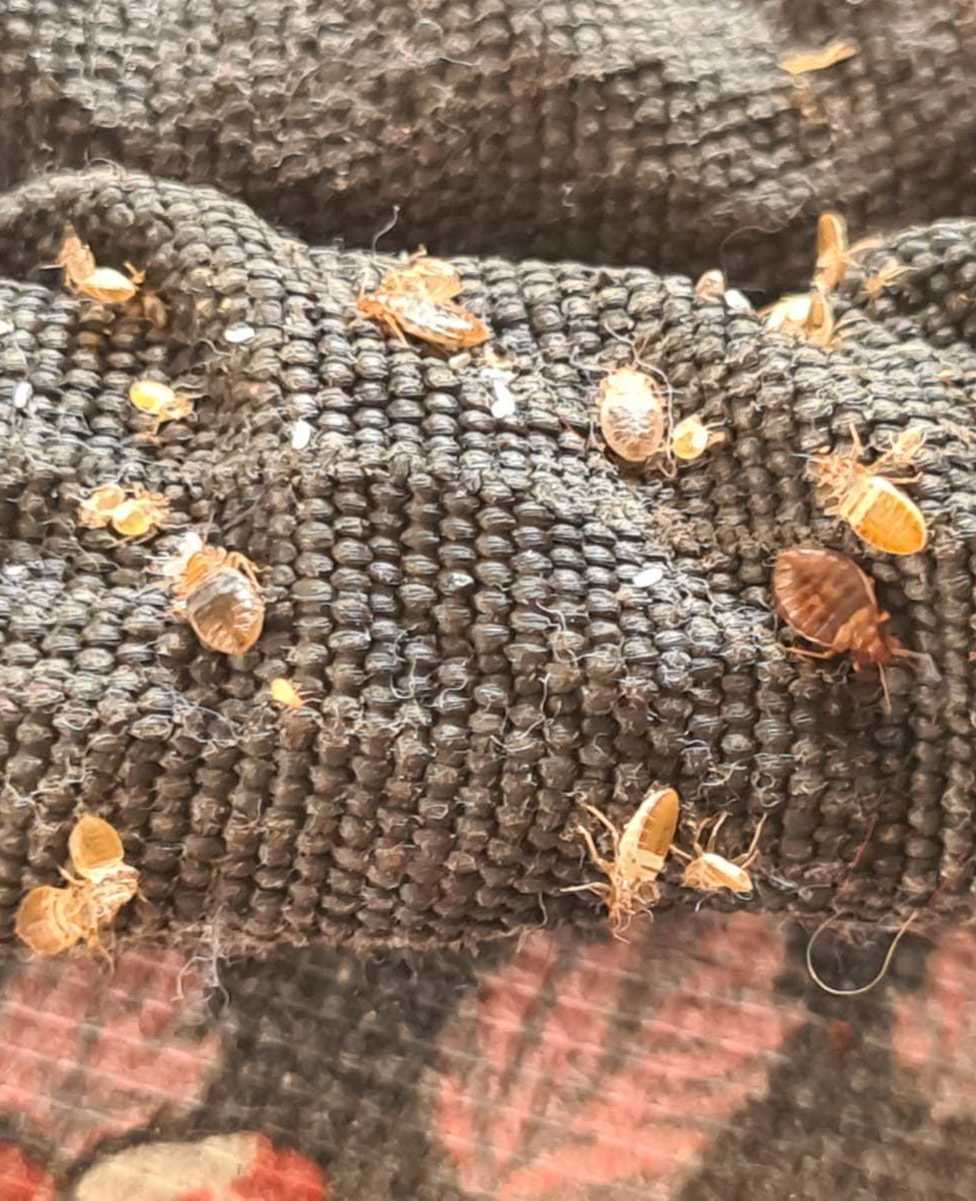 The eggs have a sticky coating and will cling to rough surfaces and are often laid in clusters in cracks and crevices , the eggs show up especially well on dark surfaces like the black webbing that is fixed onto the rear of a headboard.
Bedbug eggs are approximately 1mm in length these will sit here for around 14 days before a young bedbug emerges into the world, ah the miracle of birth … not really, these insects are the things of nightmares!
Bedbugs fall into the group of insects that have incomplete metamorphosis; this means that when a baby bedbug hatches it already has its adult form and will grow by shedding its exoskeleton just like a crab does, until eventually becoming a full-sized adult bedbug.
The other types of insects that have an incomplete metamorphosis will have larval stages where the larvae will possibly be found feeding on other items and in a totally different place; think off a caterpillar munching on leaves and flowers who then turns into a butterfly, which has the ability to fly and only consumes nectar.
Click this link for the Biology Dictionary guide on complete metamorphosis 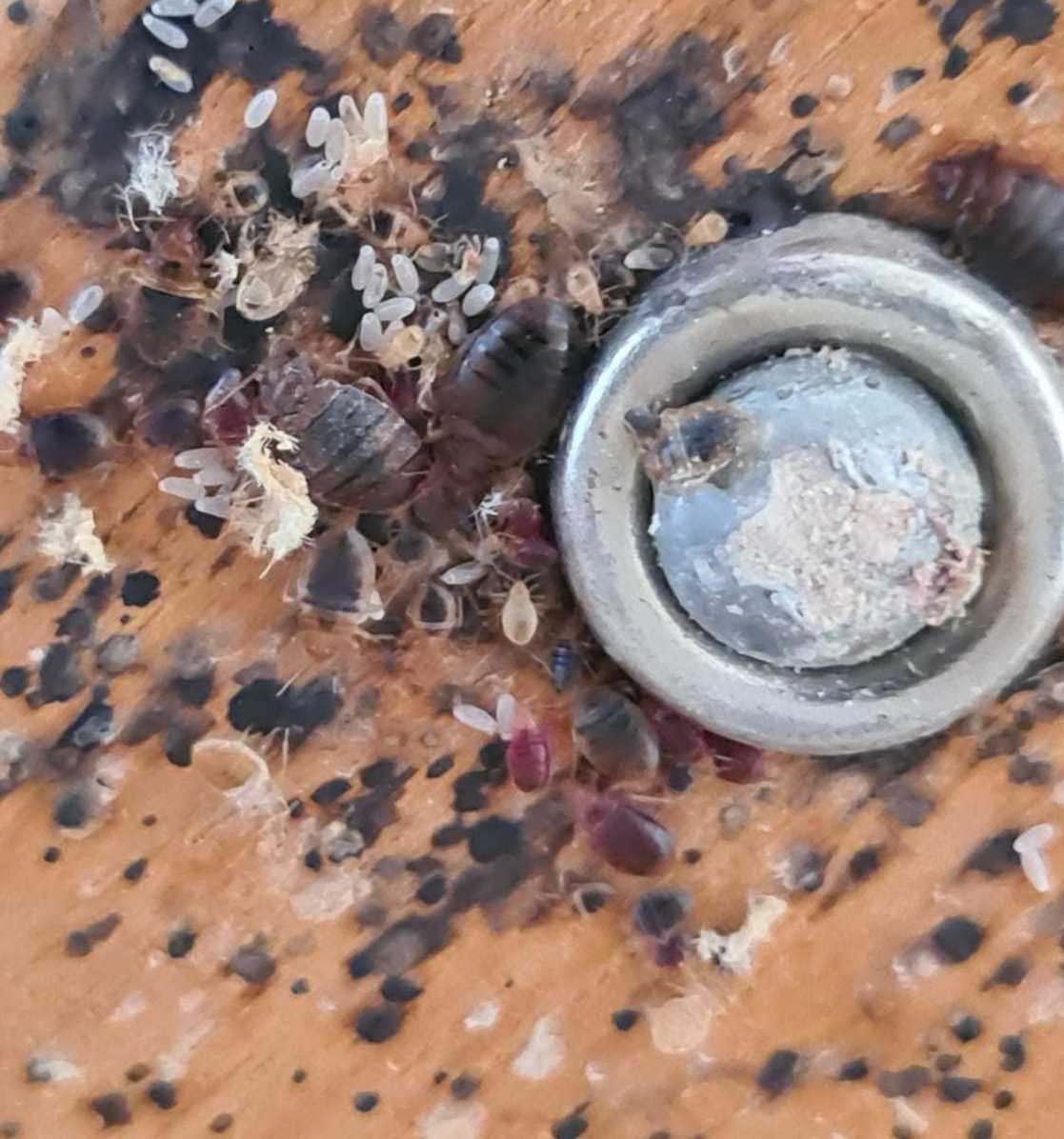 Our baby bedbug has now hatched and is up and feeding from day one; feeding on you that is! A baby bedbug is called a nymph and they need a blood meal for each stage of its lifecycle. As the young bedbug feeds it will grow and need to moult, or shed its skin, five times with a frequency of one moult a week.
Young bedbug nymphs are a yellow or yellow – white in colour slowly changing to their familiar reddish brown, I always think that the adult bedbugs remind me of apple pips in colour and shape.
So, in just over a month since it hatched, our bedbug is now a mature adult and ready to start breeding more bedbugs.
The female bedbug lays around 5 eggs every day and over the period of her adult life she will deposit around 500 of these eggs; one habit of the female bedbug is to lay her eggs in a secluded place and this may go some way to explain how easily they travel about with us. 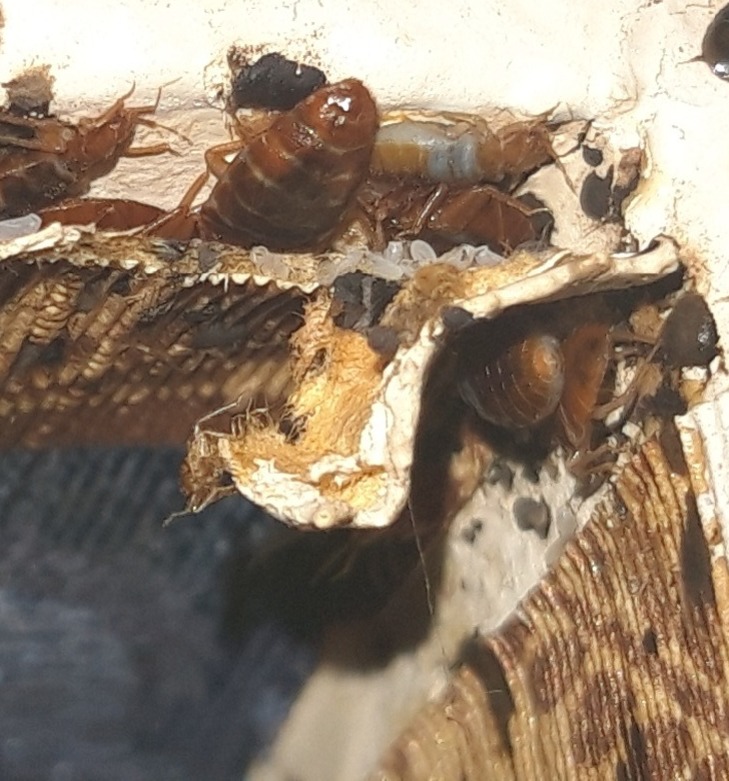 Adult bedbugs will live for around four to six months although insects like these can go into a form of hibernation, known in insects as diapause.
Have you ever wondered where insects go to in the winter?
They can’t migrate like birds and animals as the distances would be too far, so to survive cold weather and a lack of food, mature insects slow their metabolic rate to a point just high enough to keep them alive.
Insect activity and tissue growth is suspended and in the case of bedbugs, these resilient insects can survive without feeding for almost a year.
Bedbugs will excrete the liquid part of their meal – your blood, and so their bodies flatten to roughly the same cross sectional size of a piece of thick paper, this enables them to squeeze into cracks and crevices like the section of frame beds and beneath mattress buttons.
As they find a suitable hiding place, the male bedbugs give off a harbourage pheromone; information on what exactly a pheromones are is found here on:
Wikipedia - click on this link. 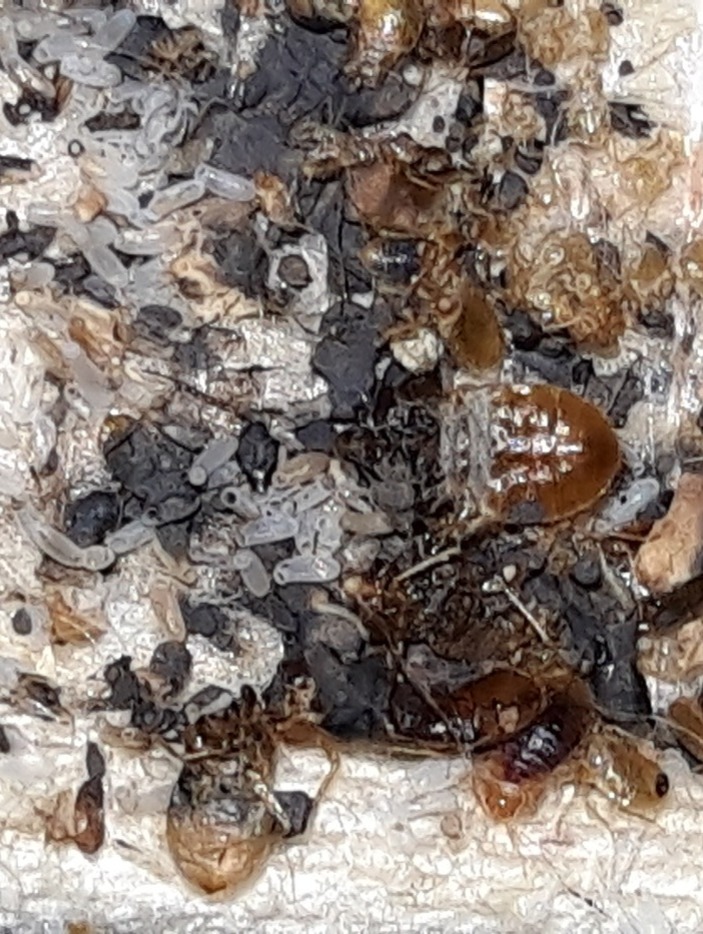 This draws other bedbugs into the area to form a cluster and when you get congregations of bedbugs you’ll also get their scent.
When bedbugs are present we can easily smell them; they have an odour that’s best described as the smell of a damp, dirty towel left in a carrier bag – if you have teenage children you’ll be familiar with this smell, usually found on a Monday when you open their school bag.
They also leave black staining from the blood that is excreted; these take on the aspect of small black dots, as the infestation goes on this will become a large black stain. To easily check wet a white towel or flannel and rub it over the black marks, if its blood they will stain the material dark red.
As the bedbugs grow they shed their skin, unlike insects like cockroaches where the young nymphs will eat those discarded skins, bedbugs only feed on blood and so these skins build up, falling to the floor behind the bed.
Look for these as being similar in colour to peanut skin, if you look closely you’ll see the shape of the insect complete with the legs – it is a true outer skeleton of the insect.

1. They are slow. Bedbugs cannot jump or run so they tend to walk around at speeds similar to that of ants.
2. They are lazy. They live of a human host and we’ll find them close to where we reside, obviously the bed or they wouldn’t be called bedbugs but your favourite chair? You’ll find them anywhere that humans sit in one position so taxi’s, buses, trains, planes and cinemas all can have small bedbug infestations.
3. Bedbugs have a long life. Bedbugs have a relatively long life for an insect; in comparison a honeybee lives for around 140 days and wasps for only 20 days. Bedbugs can go a year without feeding if the temperatures are low.
4. They like it rough. Surfaces that is, what were you thinking? Bedbug are not the best climbers on smooth surfaces, for example if you discover bedbugs on your sheets dump them straight into the bathtub as they won’t be able to climb out, this is not a solution to the problem!
5. For insects they are hard. Bedbugs can withstand a range of temperatures from almost freezing to 48 degrees Celsius, we use heat to kill bedbugs but we’re taking the temperatures up to 180 degrees Centigrade – and nothing can withstand that.
6. Surprisingly they are colourful. When a bedbug hasn’t eaten for a while they will appear translucent or white in colour, when they have just fed they are bright red as their bodies are so thin. This then changes to a deep reddish brown.
7. A bedbug isn’t just for beds. The Victorians called them wall bugs due to their habit of leaving the bed and climbing up the wall, back in the Victorian era cloth wall coverings were very fashionable and the bed bugs lived in the seams. When we carryout a bedbug treatment we check the walls and look behind pictures hanging in the affected rooms and we often find bedbugs there.
8. They breed like rabbits. Well strictly speaking they don’t but you get the idea, the eggs hatch within two weeks and take just over a month to mature, laying five hundred eggs soon means that one pregnant female becomes the start of a major infestation is left.
9. Bedbugs don’t spread disease. As blood sucking parasites go, bedbugs aren’t actually that bad. We are all aware of the Zika virus spread by mosquitos and how potentially dangerous they are but bedbugs are not considered to be vectors of disease. The bites can cause an itchy reaction in some people and its though that scratching the bites with dirty fingernails is the cause of many skin complaints arising from a bedbug infestation.
10. We can prevent bedbugs without pest control. Always wash bedding including the night clothes on a hot wash, 60 degrees Centigrade is high enough to kill off eggs and the insects themselves.
For more information on bed bug treatments and how we eradicate these insects, visit our dedicated bed bug page by clicking on the button below
bed bugs
If you have problems with bedbugs don't delay, these insects quickly get out of control and have the ability to withstand many over the counter insecticides, we always use high temperatures combined with the latest chemicals to combat bedbugs all over Maidenhead, Slough and the wider Berkshire area.
Tagged as: Bed bugs
Share this post: