Wasps, hornets and hoverflies in Maidenhead

Posted on 23rd May 2020 at 14:23
What is a pest controller?
In an ideal world we should be someone that looks deeper than just killing off everything that somebody considers to be a pest, we should look further and here at Maidenhead Pest Control we work on a different perspective to many other pest control companies. For one we want to educate people so that they can make more of an informed choice when it comes to determining whether or not a pest is a pest.
It is not for us to have salesmen or ‘surveyors’ as we call them in the industry, telling horror stories and ramping up the fear factor; everybody has their own phobia and dislikes and we should not play on those fears. So, to help people with a view to the insect pests that we will all have to deal with from March through to September, we have put together a visual guide to hornets, wasps, bee’s and hoverflies. Use this guide to help yourself understand that the loudly buzzing insect in the yellow and black colours may or may not be the pest that we think it is.

Wasps and hornets as pests in Maidenhead 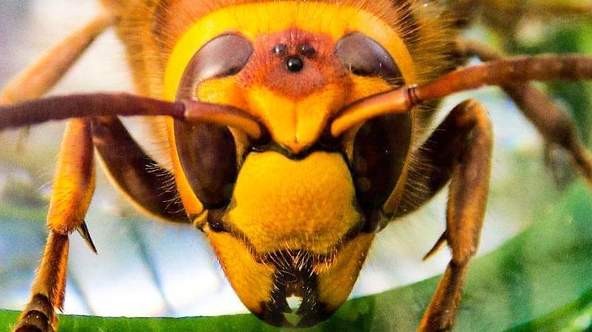 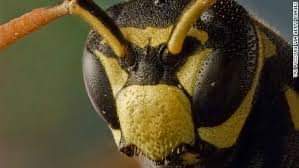 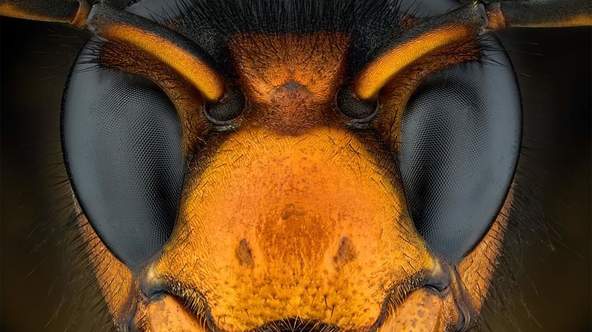 The bright yellow face of our European hornet
The black and yellow markings of a wasp
The deep yellow face of the invasive Asian hornet
First on our list are the wasps, these come in two distinct categories – the social wasps which build nests that may contain hundreds or thousands which we all know about and the solitary wasps that parasite other insects; these present no threat to ourselves and are completely harmless.
Social wasps are those that build the familiar paper nest, these wasps are extremely aggressive and given the size of modern houses and gardens for many people a wasp nest in close proximity to the building is a hazard and something that should be tackled by a professional pest controller. We can’t deny that wasps have an important role to play as nationally, they consume tonnes of insects which otherwise would munch their way through our soft fruit crops.
There are seven different species of social wasp, the two most often encountered are the Common wasp and the German wasp, and unfortunately for the wasp species these two are the nastiest! The trouble is they all use a similar set of markings to indicate to predators that they are to be left alone and for use – black and yellow; that’s a wasp.
The Median wasp is the one that buzz’s around your face, often found hanging out in pub gardens as they’re attracted to sugary drinks and these are quite timid, flap your hands at it and it’ll fly away, but, how do you know it’s the Median wasp or a German wasp? 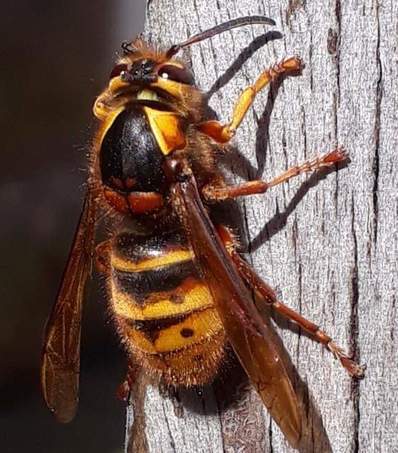 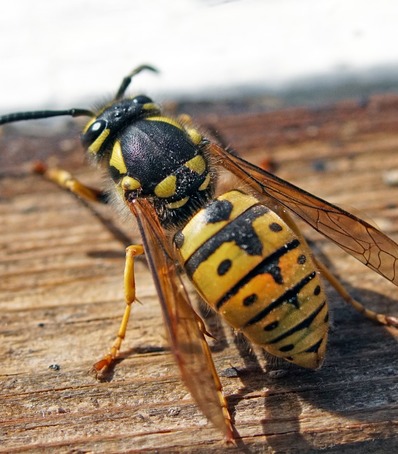 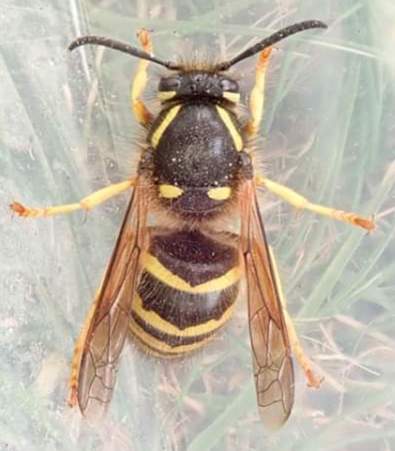 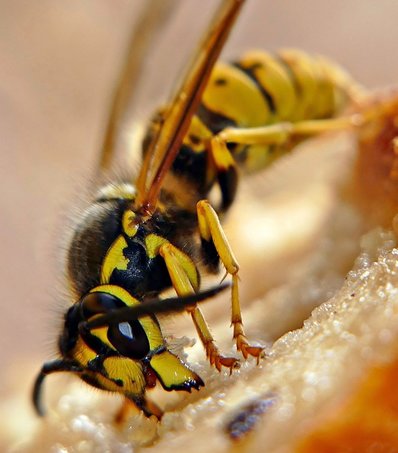 Median wasp
Red Wasp
Saxon wasp
Common wasp
We have a picture guide for the different species of wasps from All Aspects Pest Control –
click this link to visit their site and you can identify the different species there.
Species of wasps
The other types of wasps that we will see are called Nomad wasps and these are solitary wasps, instead of building a nest which they then need to defend, Nomads lay their egg on insect larvae, when the egg hatches the wasp larvae burrows into the host and eats it.
All wasps, especially the nomads will drink nectar from flowers so its common to see different species all together on open flowers and its now thought that wasps pollinate as many flowers as honeybees do. 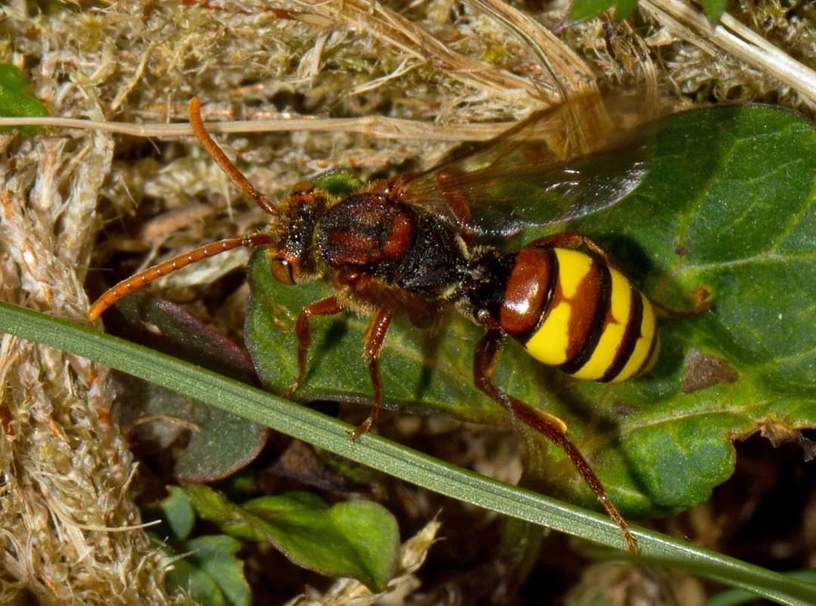 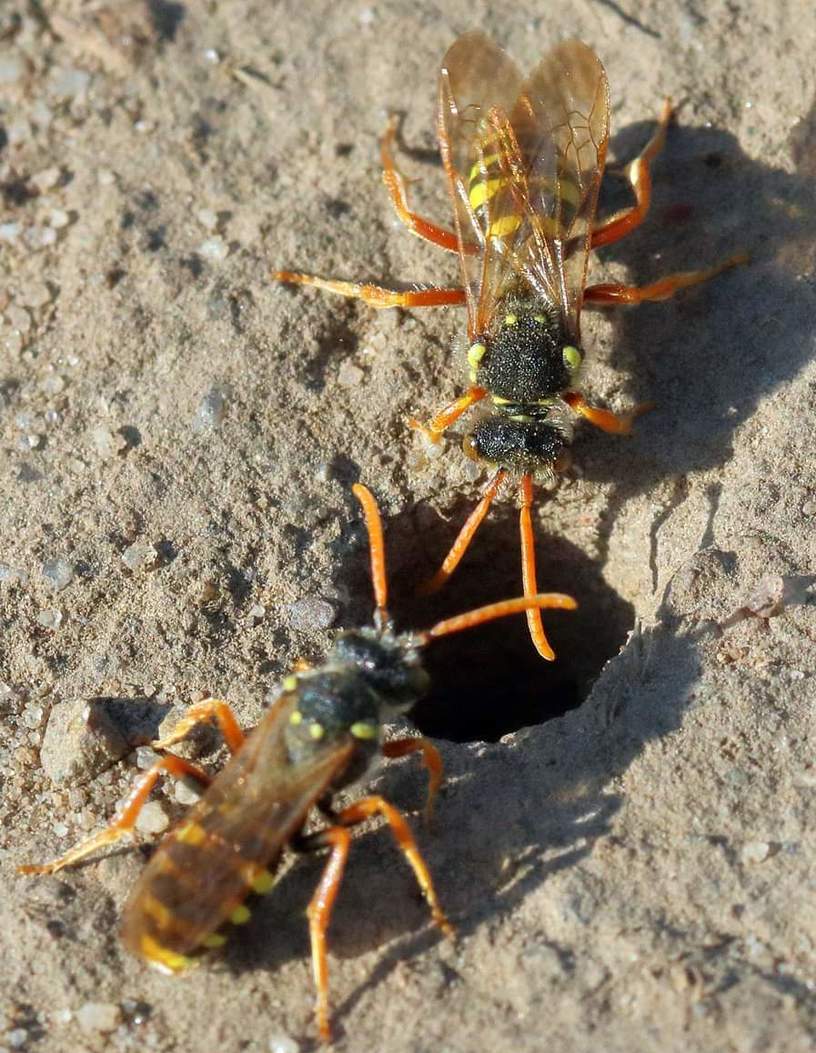 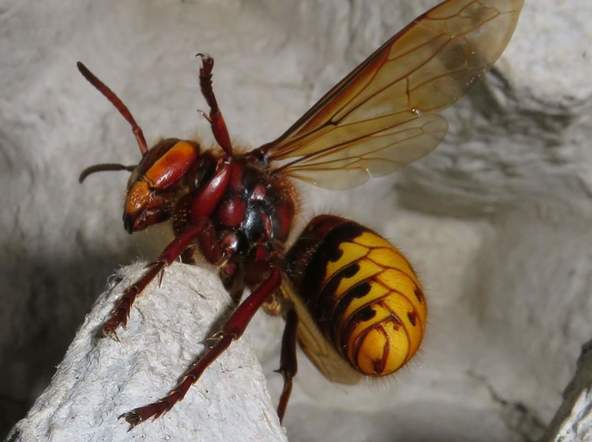 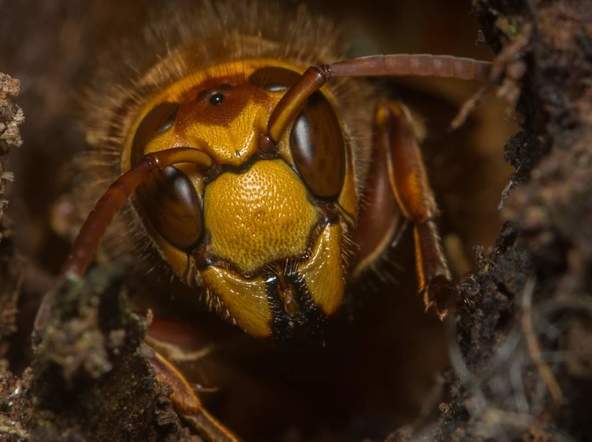 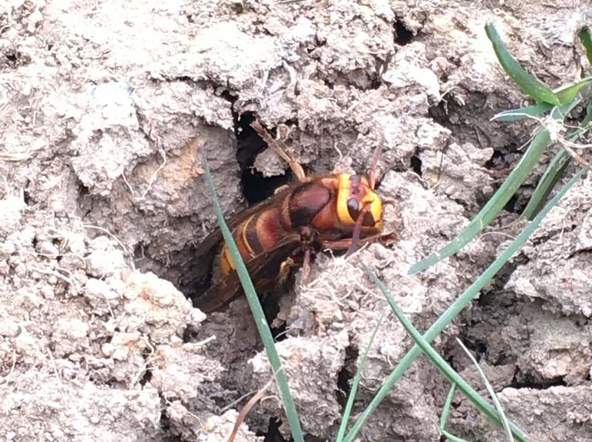 The European hornet - our native hornet and this is not a threat to bee's
After wasps come the hornets; believe it or not there is only one species of hornet found in Berkshire and that is our native, the European hornet. These are much larger than any wasp, almost twice the size of a Queen wasp and if you think of wasps as being yellow and black, these hornets are a dark red and yellow in colour.
Very loud in flight, these ‘super size’ wasps will have people reaching for the telephone as soon as they are seen, in favour of hornets, these are genial insects, fearsome in size but quite placid; some countries like Germany, have given them protected status as they are in decline and have become a threatened species.
You will find hornets around woodland areas where their choice of nesting place would be in hollowed out tree trunks, loss of habitat means that they will seek out voids in lofts and occasionally bird boxes, but that’s not their fault? I deal with hornets every year and only on a handful of occasions have I encountered an aggressive nest, usually as I’m pumping toxic insecticidal powder into their nests, they just ignore me, continuing to fly into the nest. If you can adapt and live alongside a hornet’s nest in the garden maybe we should bear the Germans’ approach in mind?
They don’t have large numbers like wasps and they eat a large amount of insects, as long as you don’t stand directly in front of the nest opening they will pretty much leave you alone, the only hornet which we MUST destroy is the Asian hornet. These are an invasive species that comes from China, the Asian hornet devours honeybees at an alarming rate. When an Asian hornet discovers a hive it releases a pheromone to attract other hornets to the location; the hornets will hover outside the hive entrance taking bees in flight and decapitating them.
The hornets suck out the bees soft protein rich brain and discard the rest at a rate of one honeybee a second; a handful of Asian hornets will destroy a honeybee colony in under an hour.
Asian hornets pose a massive risk to our beekeepers and due to the size of their nests and the amount of venom carried they kill quite a few people in France every year, an Asian hornets nest will contain multiple Queens so they form large colonies usually high up in tree’s – similar in shape and size to a Chinese lantern.
The Government has produced an Asian Hornet Watch app for smart phones and you can download this, the App has a guide to the commonly confused insects that people think are hornets like the hornet hoverfly.
Hoverflies are as their name suggests members of the fly genus and they use the yellow and black markings as camouflage, this is known as Batesian mimicry.
Click on this link to Wikipedia to learn more about Batesian mimicry 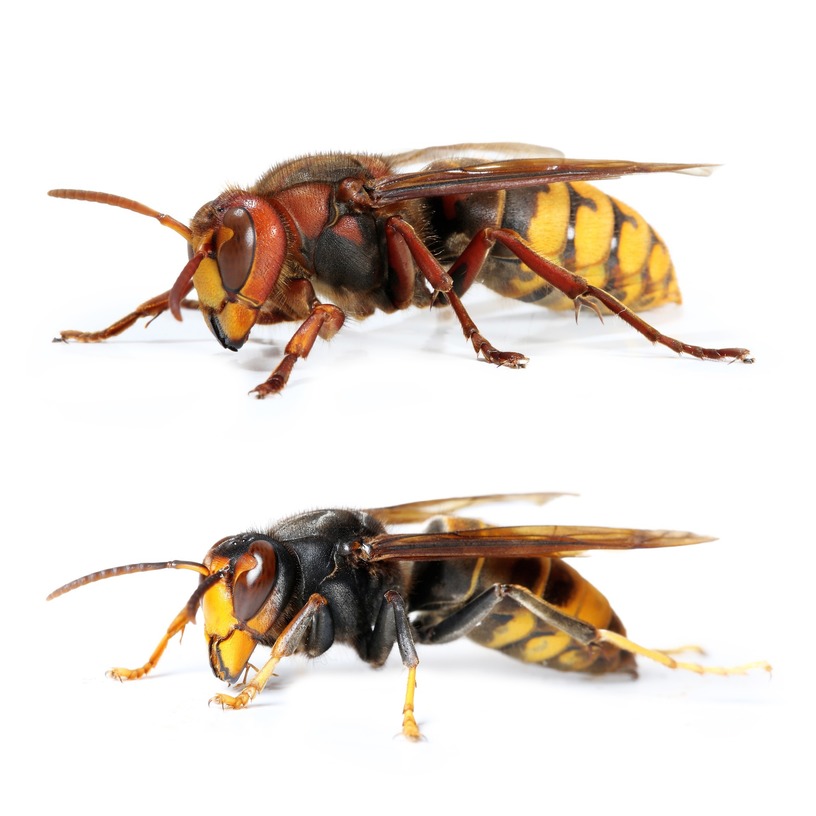 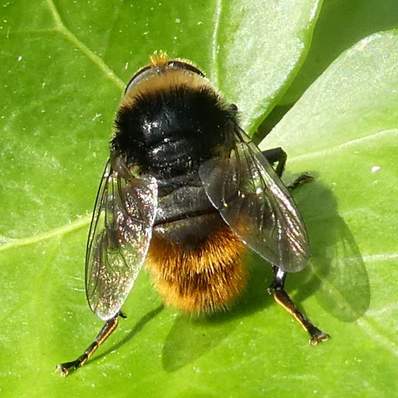 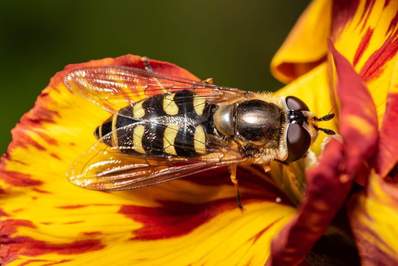 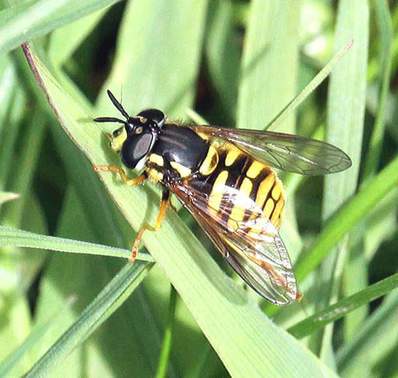 Large Narcissus Fly
Bumblebee mimic
Hornet Hoverfly
Hornet mimic
Common Spotted Eupeodes
Large Wasp Hoverfly
Wasp mimic
We get callouts for wasps every year which turn out to be harmless hoverflies, the way to tell them apart is hoverflies have large round eyes and short antennae, their body shape is bulbous when the wasp has a narrow waist.
The Hornet hoverfly will be seen flying around and entering wasp nests which adds to the confusion, the hoverfly is actually infiltrating, using a calming pheromone to sooth the aggressive nature of the wasps, once inside she lays her own eggs, these will live inside the nest eating the waste that accumulates inside while being protected by the wasps.
Hoverflies are pollinators and completely harmless, there are 270 different species in the UK and we can find most of them living here in Berkshire, a flash of yellow and black along with that distinctive buzz, look a the body shape before you reach for the fly killer as its probably a harmless hoverfly. 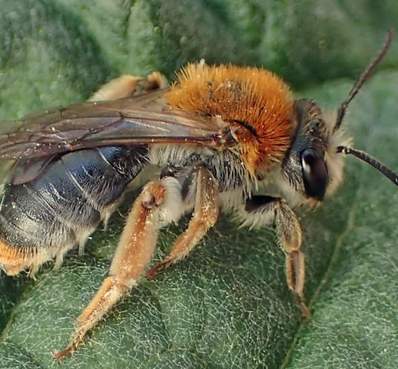 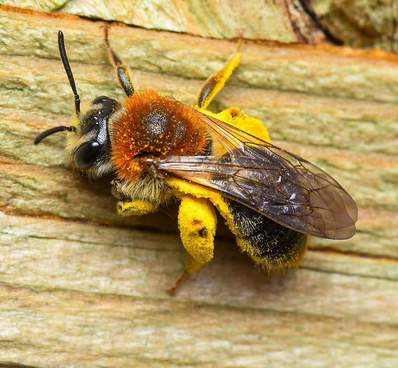 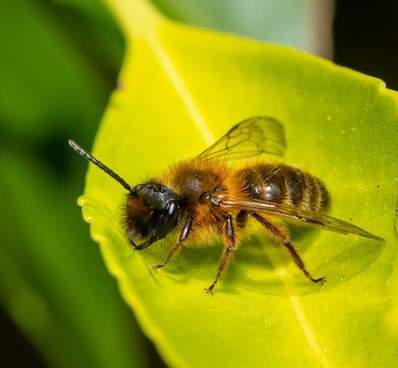 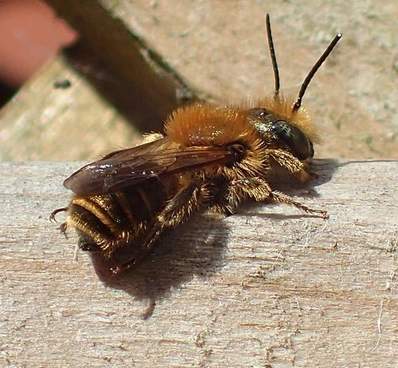 Chocolate Mining Bee
Early Mining Bee
Tawny Mining Bee
Blue Mason Bee
Another harmless pollinator that is easily confused with wasps are the two groups of bees that we call mining bees and mason bees. Both of these species look like honeybees and they are closely related with a subtle difference. Whereas honeybees live in a large colony protecting their Queen and storing food to get through the winter, the mining and mason bees have a short life span and are of a solitary nature.
Confusion arises when the mining and mason bees all find the same patch of ground or the same weathered wall to nest and rather than seeing an individual bee you have hundreds of them all flying back and forth. There is something to be said of watching the insects and understanding their behaviour to help you identify what is a pest or not; for example wasps and hornets are insectivores; when they return to the nest with their prey they still have to process it and feed the meat to the larvae inside.
They will fly straight into the nest without stopping, on leaving the nest wasps will fly straight out again whilst hornets will sit and sunbathe for a while before flying off. Honeybees congregate at the entrance to the nest, they communicate with each other as to where the best nectar rich flowers are and sources of water, we can see this in the waggle dance that they perform.
Mason bees and mining bees locate their nest by sight, remember that these are solitary and there maybe numerous bees all nesting in the area? Its common to see clouds of bees all searching along a wall or over a patch of ground for their individual nest hole and this is when we get called out to a ‘swarm of bees’. These bees are harmless, and we really need to think twice before asking for a pest controller to come out and treat them; it’s not unusual for some companies to target these bees saying that they sting and are a pest.
They do have a stinger its true, but the venom is not powerful enough to give you any pain or even a reaction. As pollinators these are the most productive with one bee able to pollinate an entire apple tree.

When it comes to effective pest control we need to operate in an ethical manner and this comes to the fore when we’re dealing with wasps and hornets, where possible we will try and move small bumblebee nests without killing them.
We will not under any circumstances destroy mason and mining bees, with regards to honeybees we have a national understanding with the pesticide manufacturers and suppliers that honeybees can be treated however their nests must be sealed up to prevent bees from commercial hives coming into contact with the chemicals.
This is not always possible especially if they have started a nest inside a chimney for example, professional pest controllers should know the rules and should act responsibly – always use a professional for wasp nest and hornet nest treatments.
Tagged as: Wasps, Wasps and bee's
Share this post: